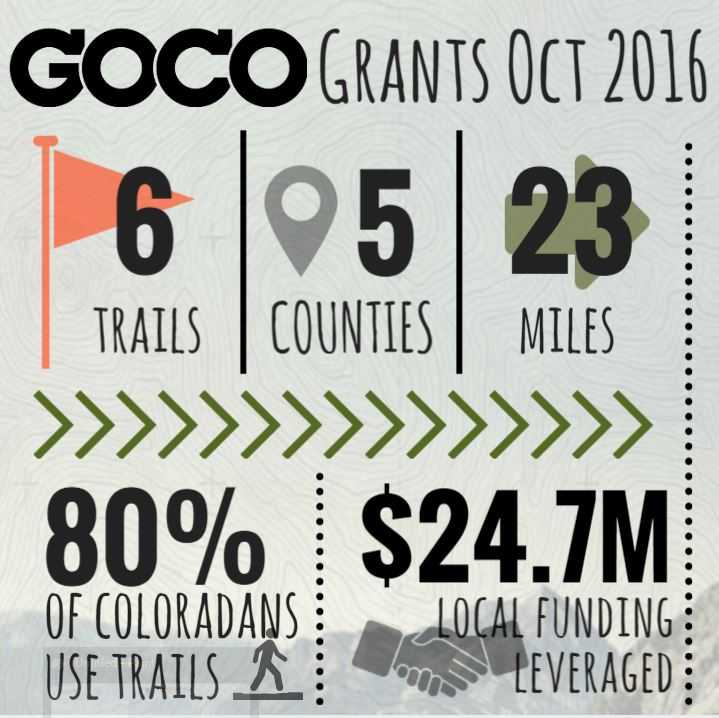 Today the Great Outdoors Colorado (GOCO) Board awarded the first round of funding for its new Connect Initiative, totaling $10 million in grants that will close critical gaps in trail networks across the state.

An Eagle County project will be 37% closer to completion and its target of connecting the entire Eagle River Valley with walkable, bikeable trail access; the City of Fruita will close one of the three remaining segments of the Colorado Riverfront Trail; Jefferson County will connect 24 miles of Golden trail networks to the mouth of Clear Creek Canyon; South Suburban Park and Recreation District will connect two parks and provide relief along a heavily-used commuter route; the Town of Castle Rock will create new public access to local open space; and Douglas County will connect Chatfield State Park with downtown Parker, moving one step closer to a continuous trail loop around the Denver metro area.

GOCO’s Connect Initiative will invest $30 million over the next three years in closing trail gaps and creating safe access for all Coloradans to the outdoors. More than 80% of people in Colorado recreate on trails, and closing gaps and increasing connectivity has long been a top priority for the state’s residents.

This first round of Connect Initiative grants will have a significant impact on moving six highly-demanded trail projects forward, with funding helping to construct more than 23 miles of trail and leveraging nearly $25 million in local matching dollars.

Funded projects are as follows:

Phase 5 of the East Plum Creek Trail will extend the trail system two miles to the south along the East Plum Creek corridor, with 99% of the trail on public open space. The East Plum Creek Trail is open to walkers, joggers, and bicyclists and is ADA-accessible. It offers a variety of outdoor programming activities; is a safe, off-street route to travel between neighborhoods by bike; and connects area residents to Castle Rock’s Historic Downtown. The extension of the trail, to be designed in 2017 and constructed in 2018 and 2019, will connect more neighborhoods to downtown and also create new public access to undeveloped open space.

Douglas County will extend the East-West Regional Trail from Lone Tree to Parker, marking the culmination of a regional trail project first conceived by Douglas County citizens in 1986. The result of cooperative efforts by Douglas County, the City of Lone Tree, the Town of Parker, and others, the new 8-mile segment marks the final phase in a 28-mile construction project started in 2002. It will also be a major component in a multi-entity vision of completing a continuous loop trail around the outer edges of the Denver metro area.

Kokopelli Section of the Colorado Riverfront Trail, $2 million to the City of Fruita

Serving the entire Grand Valley and its estimated 100,000 residents, the Colorado Riverfront Trail is a regional trail system extending from Palisade through Grand Junction, terminating in Fruita to the west. Over the past 25 years, local communities and the Riverfront Commission and Foundation have collaborated to construct 29.75 miles of the CRT.

The Mary Carter Greenway is a vision 20 years in the making, making up the southern segment of the South Platte Trail and serving as the backbone connecting a multitude of east-west trails along the South Platte River. The East Bank segment, running from West Oxford Avenue south to West Union, is the final phase of the trail and will provide new access to parks, trails, local schools, businesses, and neighborhoods. An estimated 500,000 people use the Mary Carter Greenway each year, including bikers, kayakers, tubers, walkers, and runners.

The new 1.75-mile, concrete, multi-use segment of trail will match the quality of an up-canyon, 3-mile, GOCO-funded segment that was recently completed and will connect 24 miles of trail within the City of Golden to the western end of the stunning oxbow at Tunnel #1 on Highway 6.

Since 1996, Eagle County and its partners have worked to build a trail system connecting the entire Eagle River Valley to Glenwood Canyon, Summit County, and the Rio Grande Trail in Garfield and Pitkin counties. This trail segment will complete the largest missing link project of the remaining 17 miles of the Eagle Valley Trail,  starting near Nogal Gulch Road in Eagle and ending at Horn Ranch Open Space.

The project will create safe access separate from Highway 6, where pedestrians and bicyclists attempt to use the one- to three-foot shoulder; provide close-to-home access to the outdoors and safe, inexpensive commuting alternatives for residents; and promote the area’s outdoor recreation-based economic development.