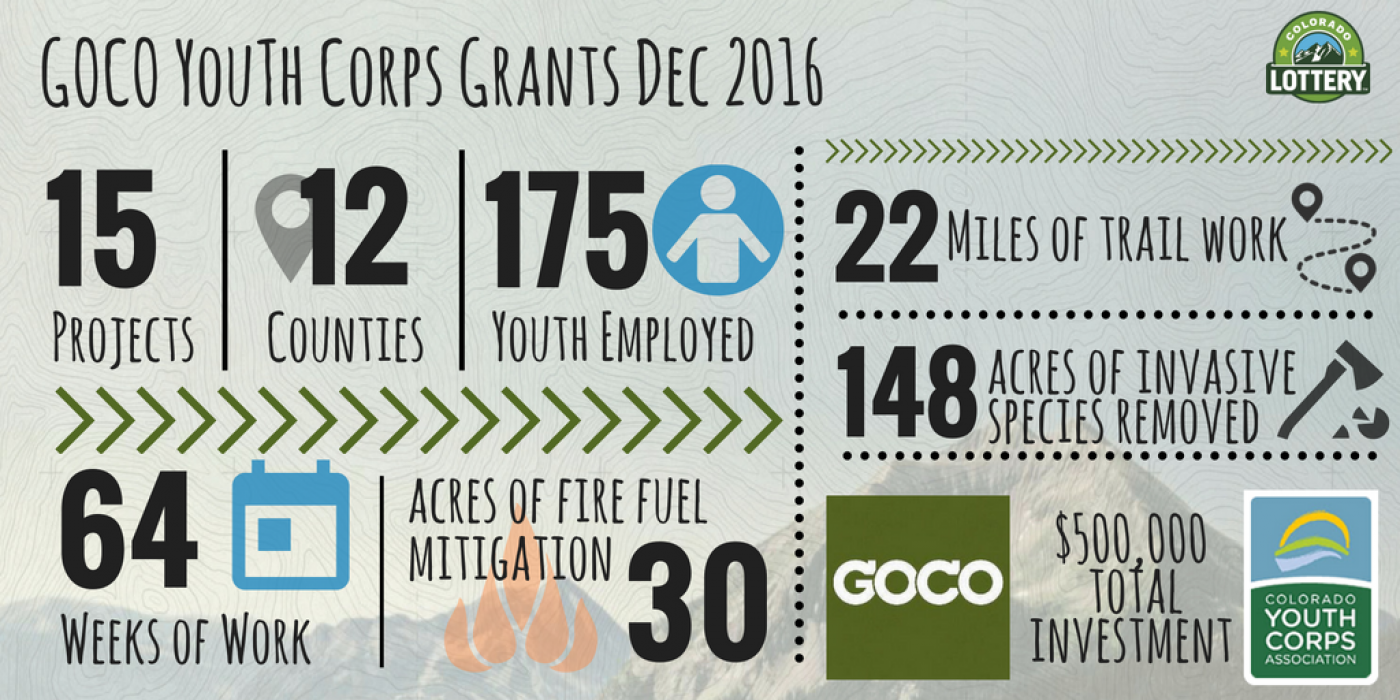 DENVER – The GOCO Board awarded $500,000 in funding on Thursday for Colorado communities to employ Youth Corps crews on projects ranging from restoration work and trail construction to fire mitigation and invasive species removal.

Corps members earn a stipend for their full-time service and an AmeriCorps education award to use toward college or trade school. The organization serves 1,700 young people annually.

As part of this round of grants, CYCA and will employ crews from seven Youth Corps across the state to work on 15 projects in 12 counties. They will construct or rehabilitate 22.67 miles of trail; construct 6,500 feet of fencing; mitigate fire on 29.5 acres of land; remove invasive species on 148 acres; and restore .54 miles of river habitat.

The $500,000 in funding covers the grant awards for the projects as well as administration of the Youth Corps program.

Grant details are as follows:

With assistance from GOCO, the Town of Crested Butte and Crested Butte Land Trust have worked collaboratively to conserve over 1,000 acres in the Gunnison Valley, including 13 miles of trail used by hikers, bikers, and equestrian users. Multiple users on the conserved land and an increased number of visitors to Crested Butte create a greater need for stewardship, which is why Western Colorado Conservation Corps (WCCC) will spend four weeks trail building—finishing one remaining mile of the Baxter Gulch Trail—and removing noxious weeds. The project will wrap up six years of trail work.

Crews from Mile High Youth Corps-Southern Front Range (MHYC-SFR) will mark and clear trail paths, construct and close trails, and thin live and dead standing trees within Black Forest Regional Park, along the Palmer Divide northeast of Colorado Springs, and at the Pineries Open Space in El Paso County in order to improve ground cover, reduce stormwater runoff, and increase water infiltration. The project will increase recreation access and assist with recovery from the Black Forest Fire of 2013.

The City of Montrose parks staff will oversee a WCCC chainsaw and pesticide application crew as they spray or remove Russian olive, tamarisk, thistle, and white top; plant native species; and reseed with native grasses on land surrounding the nine miles of new trails around Cerise Park in Montrose’s downtown area. The work will also help formalize the new trail network created in 2015.

Weld County Youth Conservation Corps (WCYCC) will improve four of Greeley’s natural areas through the removal of Russian olive trees and unneeded fencing. Crews will remove trees on one acre of the 10-acre Mountain Shadows Natural Area and on 2.5 acres of the Country Club West Natural Area. The two areas where fencing will be removed are Sheep Draw Natural Area and Cottonwood Bend Natural Area, both located along the Cache la Poudre River and acquired with funding from GOCO’s River Initiative grant program.

Crews from Mile High Youth Corps - Southern Front Range will be deployed to Duckett Creek Ranch on the eastern side of the Sangre de Cristo Mountains near Westcliffe. With the greater goals of wildlife habitat improvement, future fire mitigation, and scenic view improvement for public enjoyment, youth will remove burned debris and treat invasive vegetation.

Larimer County Conservation Corps (LCCC) will assist in completing one of the three remaining miles of a new multi-use trail at Hermit Park Open Space, connecting the perimeter trail to the Hermit’s Cabin Trailhead. These efforts will continue work begun in 2016 and bring the park one step closer to the completion of its full trail system.

For four weeks, youth from MHYC-SFR will work on fire mitigation along the Intemann Trail on the southern trail boundary of Manitou Springs, creating a critical fire break in an area at high risk for wildfires. The trail is a popular recreation destination for local residents and tourists.

Mile High Youth Corps - Southern Front Range will be employed to remove invasive species from a 19-acre portion of John Griffin Regional Park. Tamarisk and Russian olive trees are detrimental to a habitat ripe with native plants and wildlife.

The City of Grand Junction, Ducks Unlimited, and Tamarisk Coalition are partnering to conserve 25 acres of habitat adjacent to the Colorado River at Las Colonias Park. Goals of the project include providing wildlife with slough habitat and increasing public support for wetlands. A new channel will be excavated so new vegetation and forest can be established. WCCC will also assist with planning. This project also received a GOCO habitat restoration grant.

The Montezuma School to Farm Project (MSTFP), a program of the Mancos Conservation District, and the Garden Project of Southwest Colorado (GPSWC) will train and work with Southwest Conservation Corps (SCC) to install the foundation of a new school garden at Manaugh Grade School in the Cortez School District, and to build an outdoor classroom at the Ohana Kuleana Community Garden in Durango. Together the projects will serve over 1,200 youth and adults annually.

Located in the Laramie Foothills of Larimer County, Phantom Canyon Preserve is one of the last remaining roadless canyons along Colorado’s Front Range. The trail alongside the river in the canyon bottom is impermanent due to overgrown vegetation, and as a result, the river corridor is negatively impacted and invasive species are making headway. Larimer County Conservation Corps (LCCC) will help establish a sustainable river trail.

Spring Creek Park Maintenance and Mitigation, $26,400 to the Town of Brookside

Spring Creek Trail Restoration, $12,150 to the City of Steamboat Springs