The Spirit of Durango: One Town's Conservation & Recreation Values

With red mountains, a blue river, and a lush green valley floor, Durango has always brimmed with local color. What the city wanted was something special to tie it all together. With a lot of sweat and volunteer hours—and some key help from Great Outdoors Colorado—Durango residents set out to create one of the West’s premier networks of public trails, ballfields, and open space.

They succeeded spectacularly. And in the process, they ended up making something even better than intended. They also built community spirit.

Today Durango enjoys 300 miles of trails within a half-hour of downtown. The centerpiece, an eight-mile paved path along the Animas River, sometimes bustles with as many people as the town’s famed Durango & Silverton Narrow Gauge Railroad. Major new city park complexes have become meccas for youth soccer, rock climbers, and seniors on evening strolls. One large park facility even managed to unite two traditional adversaries, a town and its college, in a common goal of outdoor recreation.

“When I was growing up here, nobody ever went to the river,” said Ted Compton, a member of a multi-generation ranching family who works as an engineer and volunteers for the local La Plata Open Space Conservancy. “Now you go downtown, and every other car will have a kayak or bike on it…. The public has agreed it’s a very valuable thing to protect these conservation values.”

“What we have in common is a lot stronger than our differences,” said Steve Schwartz, vice president for finance and administration at Fort Lewis College. “Our town is small, and we’re isolated, and we have to take care of each other.”

“Our community comes together and literally digs in with shovels to build those trails. And by doing that our community is closer,” said Mary Monroe Brown, executive director of the local Trails 2000 group, which was formed in 1989 to promote trail building and connectivity.

Every year, local residents donate about 3,000 hours of their time on trail construction and maintenance around Durango, she said. About one of every five county residents has volunteered at some point to work on a local trail.

Swinging a Pulaski, the trail-building tool with an axe blade on one side and an adze on the other, has become a repeated rite of passage for residents of La Plata County.

Great Outdoors Colorado has been a major backer of all this progress. Since 1994, GOCO has contributed $10.3 million to 67 different projects in La Plata County. That works out to about $190 per county resident of GOCO money for parks, open space, and recreation. GOCO money has helped to conserve 3,688 acres in the county. GOCO-funded conservation easements have saved the open space of local ranches from being subdivided into development.

Local officials say the GOCO investments have been worth more than just dollars and cents. In a corner of Colorado long skeptical about government involvement, GOCO money has helped local officials prove to residents that they could make good on big promises.

Amy Schwarzbach, City of Durango’s natural resources manager, said it all started in 1994 on the west side of town, at a place now called Overend Mountain Park, which was named after the six-time national mountain-biking champion and longtime local resident.

At the time, Durango had no real organized trail system and few prospects to get one. But a local coalition of mountain bikers, hikers, Trails 2000 and the La Plata Open Space Conservancy banded together, raised local money, and applied for and received a GOCO grant. Dozens of volunteers donated hundreds of hours to build trails.

“Overend was the power of partnerships,” Schwarzbach said. “The community came together to show support – everyone came out of the woodwork.”

Overend Mountain Park became an instant hit with hikers and bikers, as well as a source of pride for residents of Durango. It also become exhibit No. 1 in the case that government and nonprofit officials could be trusted to build a terrific mountain park. Pointing to the success of Overend, City officials sought and received voter approval in 2005 and 2015 to raise taxes specifically for more parks, trails, open space, and recreation facilities. 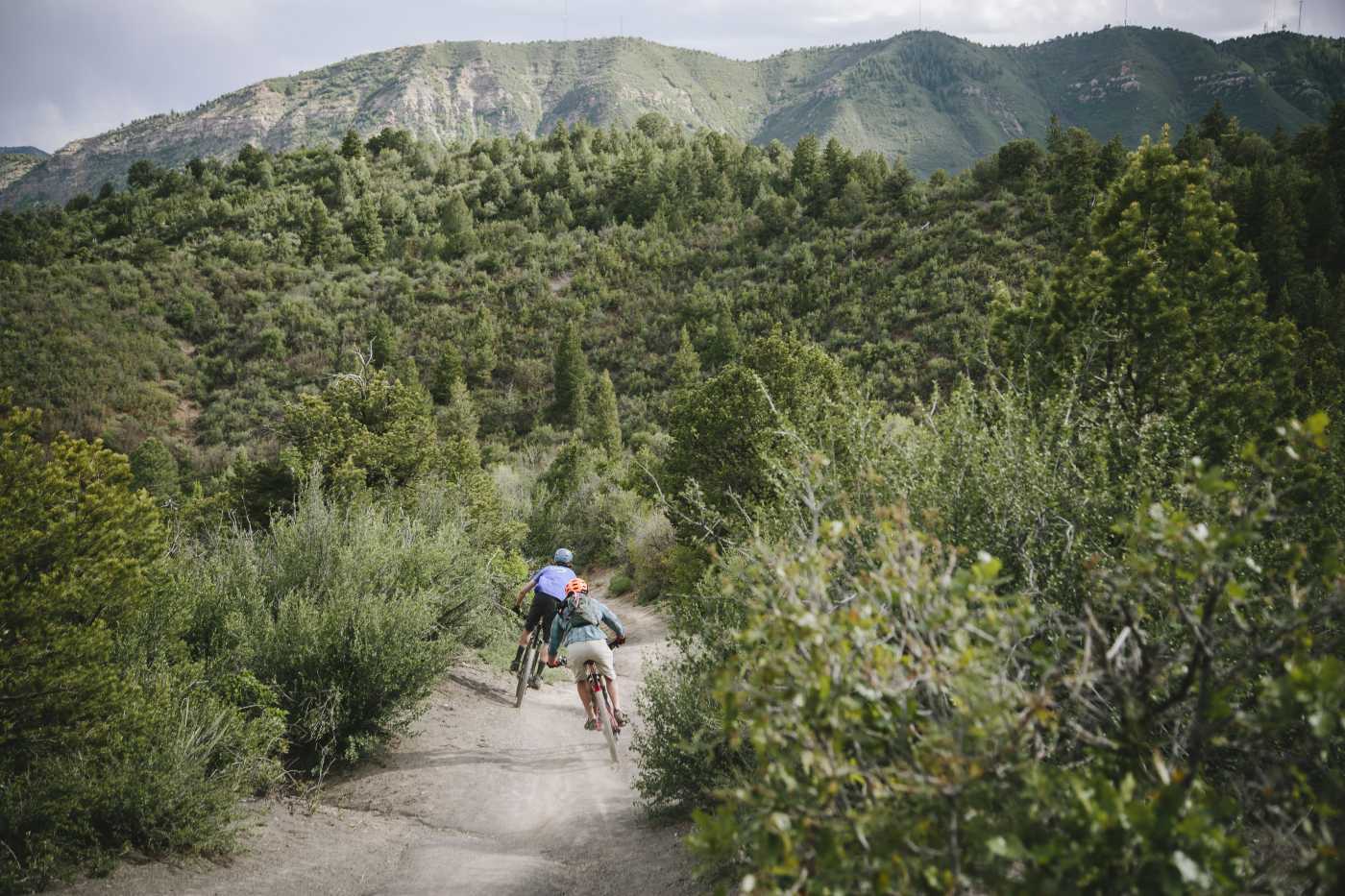 “This community had the wisdom and value system to support a couple of dedicated sales taxes – taxes that wouldn’t impact our finances as individuals but would make possible monies to do things that we really wanted to see happen,” said Rich Hoehlein, chair of the parks and recreation advisory board.

With a mix of local tax money, GOCO money, and volunteer labor, Durango residents built a series of trail networks with terrain as varied as the Four Corners region. Overend is high desert with spectacular views for hikers and bikers. Dalla Mountain Park is craggy and shady and especially popular with rock climbers. Horse Gulch rises from an open meadow to a ridge with technical trails for advanced bikers. Oxbow Park and Preserve is the City’s biggest beach and one of the finest collections of local willows for yellow warblers and song sparrows. And running through it all is the Animas River Trail, the signature corridor for runners, bikers, walkers, baby strollers, anglers, and kayakers. 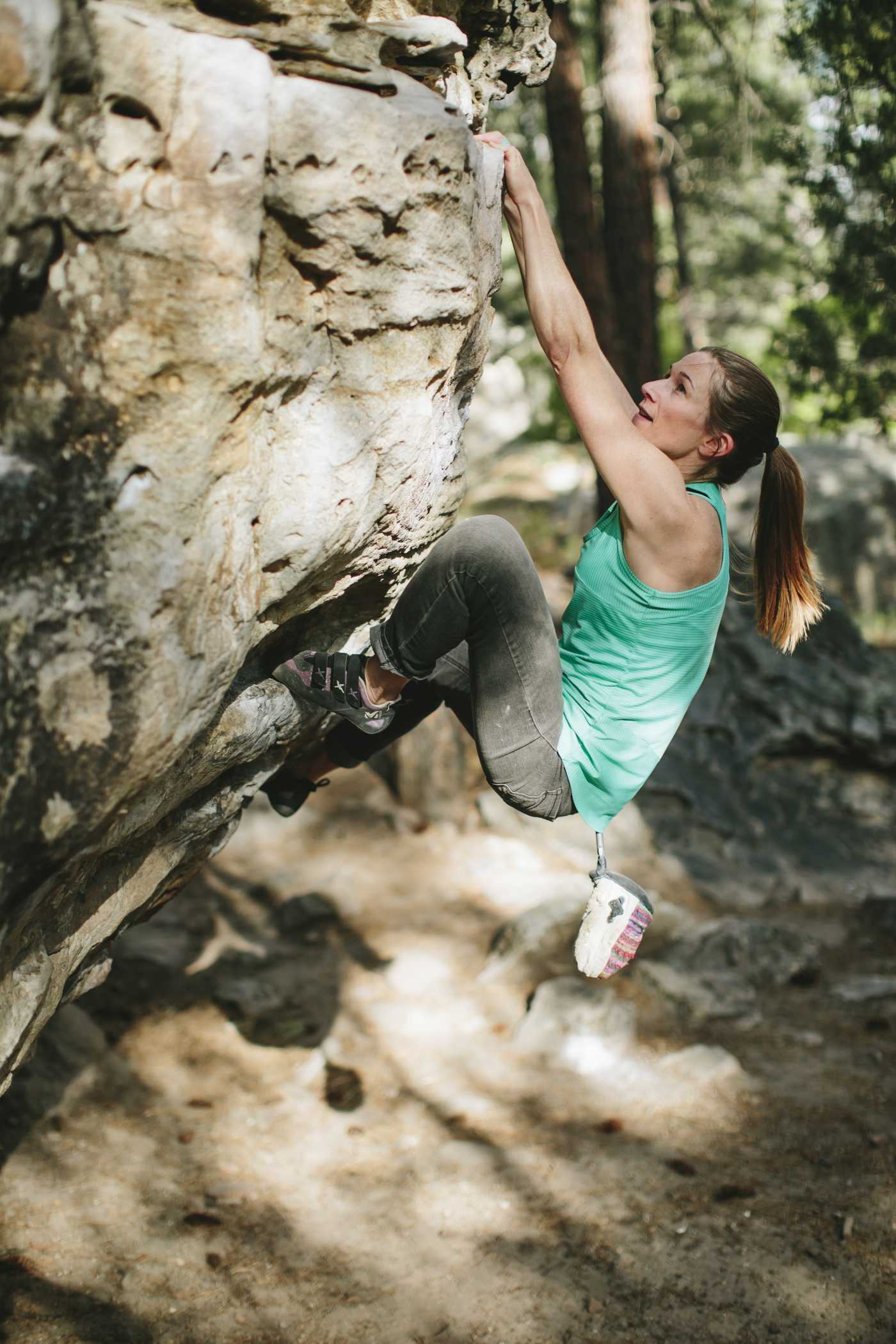 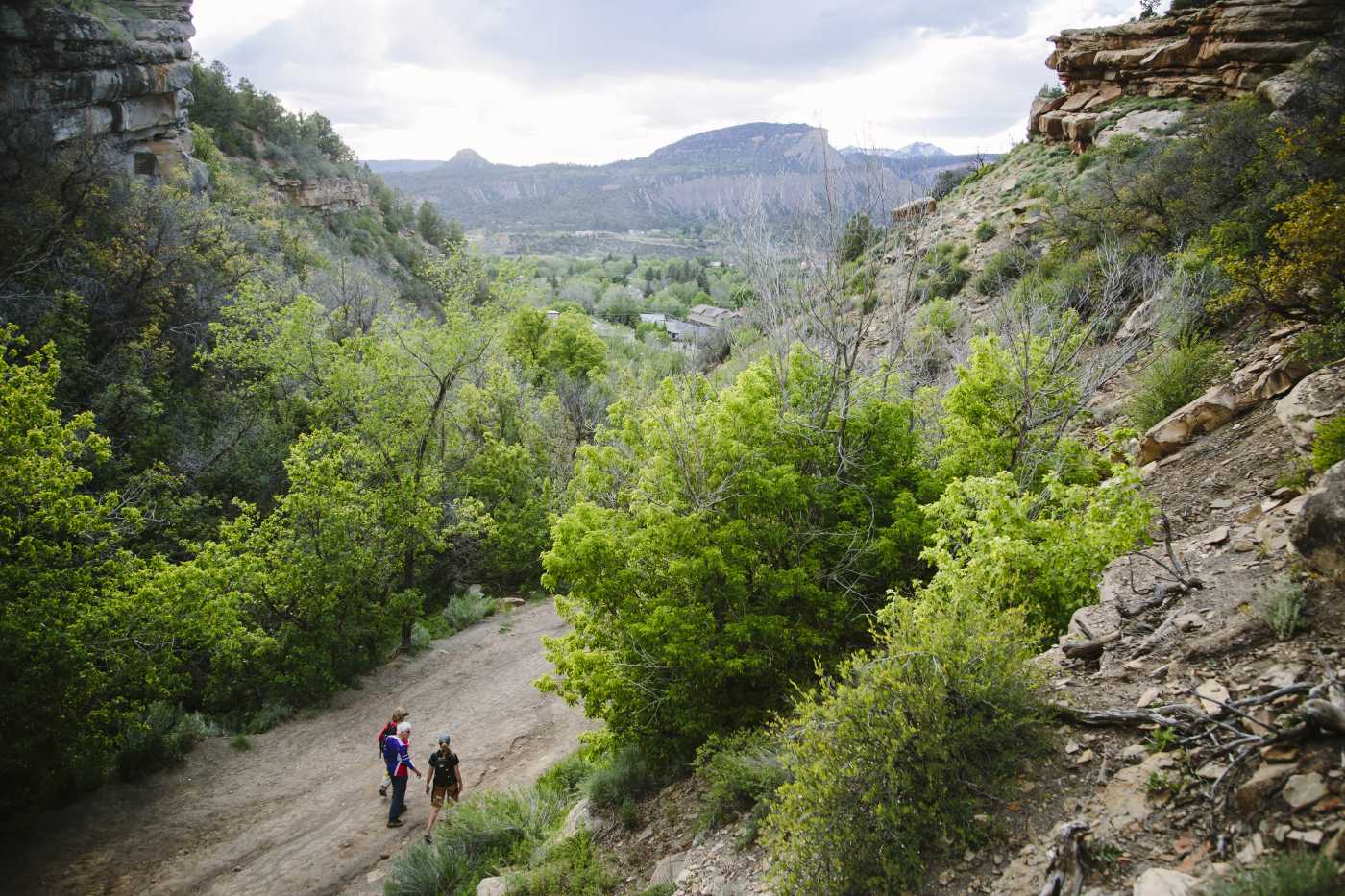 Much of the Durango trail network was engineered as an innovative “stacked loop” — a system the puts the easiest segments closest to trailheads for beginning mountain bikers, with the more technically challenging areas farther away for accomplished riders. The stacked loop system helps reduce conflicts between hikers and bikers on the trails.

Another impressive accomplishment was the joint effort by city and college officials to boost ballfields for all. When Fort Lewis College administrators realized they had 20 vacant acres, they brainstormed with city officials to figure out the best use for both city residents and college students. The result was a complex of softball fields, soccer pitches, and tennis courts shared by students and townies—a stark departure from the usual city vs. campus tensions of other college towns.

All these parks and open space successes have helped to transform and diversify the economy of Durango, officials said, attracting businesses and entrepreneurs who want trails and an outdoor lifestyle.

“All of us benefit indirectly from these amenities because we have this beautiful livable community that attracts super smart and talented people and aids in economic development,” said Doug Lyon of Fort Lewis College.

Though political conflicts are inevitable, Durango officials say their experience with so many successful projects have taught them how to value cooperation over confrontation. 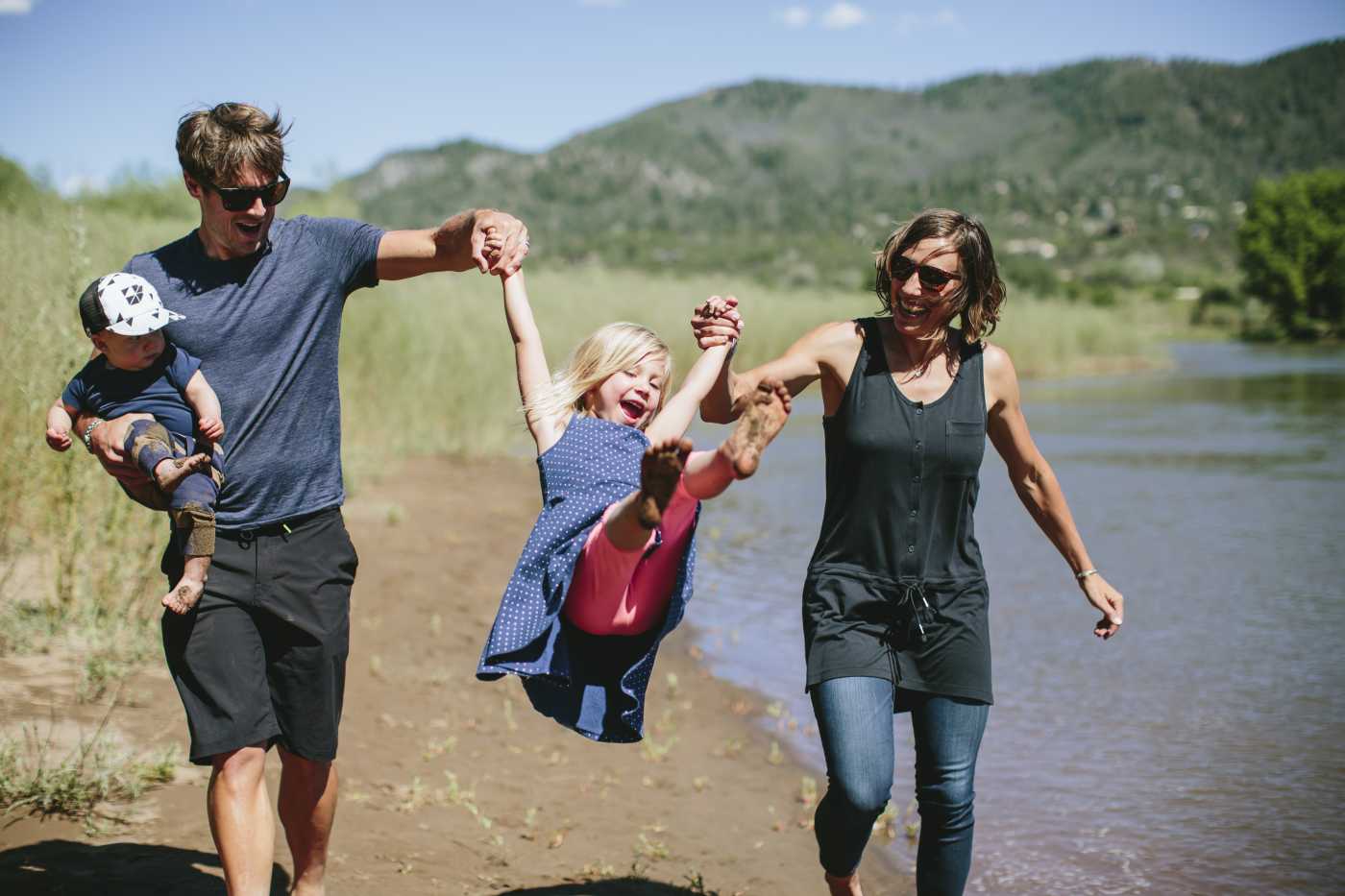 Photo of Oxbow Park and Preserve by Joel Caldwell

Added Steve Whiteman, chairman of the natural lands preservation advisory board, “We care a lot about quality of life here. Parks and recreation and open space – those are all really, really important to this community. This community is known for its connection with outdoor values and recreation.”

Cathy Metz, parks and recreation director, captured the essence of the City, “This is a special place and there is overwhelming support by the community for parks, trails, open space, and recreation. Parks and Recreation is the reason people want to be in Durango.”

We live near the current end of the Animas River trial. When we bought our house we first heard the rumor of extending the trail. At the time we just had to cross our fingers and hope it happened. Now they’ve broken ground, and it’s actually happening! We are so, so excited! We already use the river trail for daily commuting and for weekend strolls with fiends and family. Now with the expansion we’ll get to use it for weekend river laps!! We are so fortunate and blessed to live in a town that values this kind of thing and invests in the kind of infrastructure that gives us such a wonderful quality of life.
Thanks for sharing, Marty. Durango is so special.