Where Do You GOCO - November 2020 closed projects 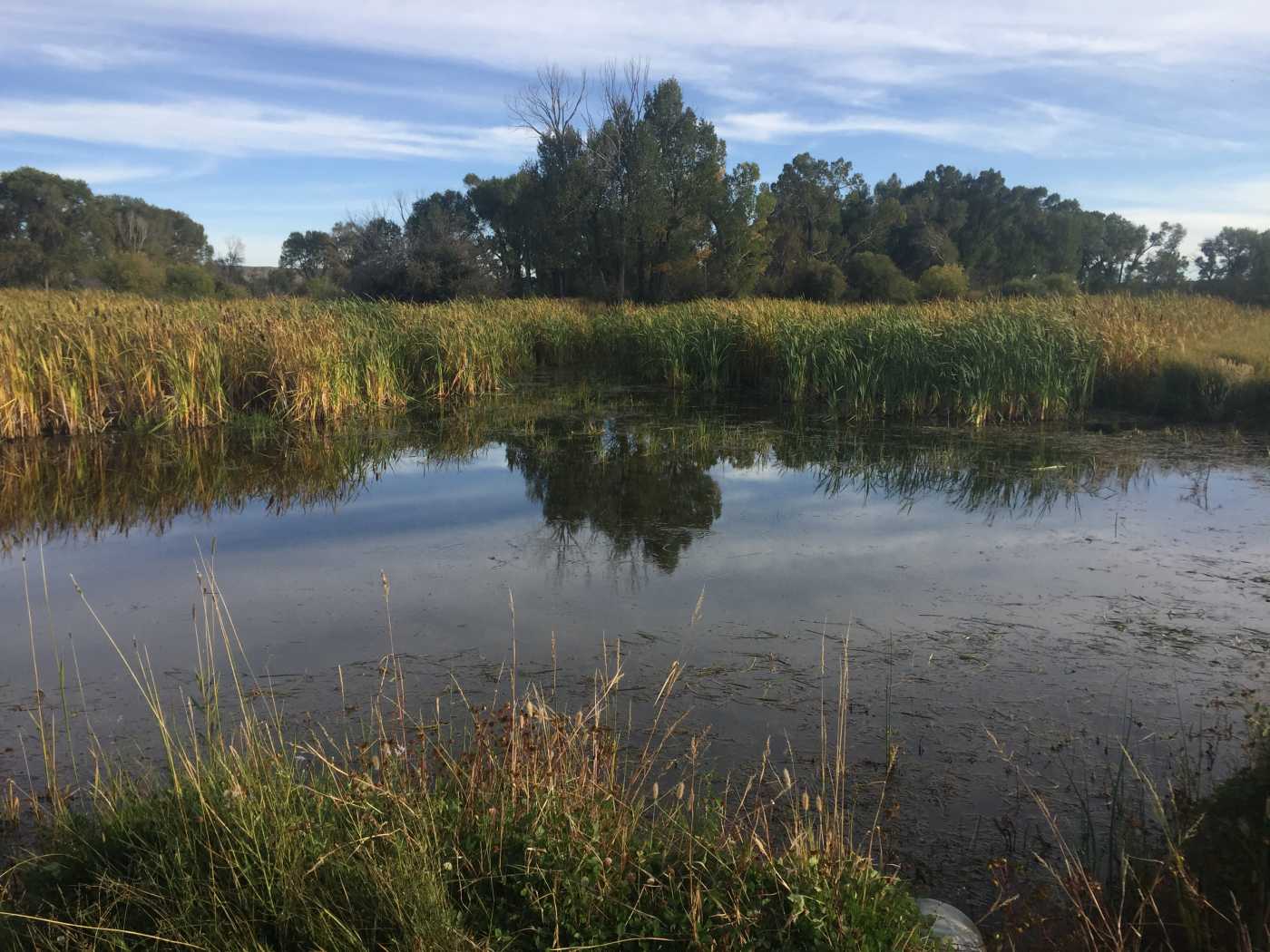 For 28 years, GOCO has improved Colorado’s great outdoors with the help of Colorado Lottery proceeds. We’ve put more than $1.3 billion in proceeds back into 5,300 projects to improve the lives of Coloradans across the state.

After projects are awarded funding, grant recipients have about two years to make their projects happen.

In November, 16 projects closed, representing more than $3 million in GOCO investments into local communities across the state. Scroll to see if one’s near you:

Baca County used its Local Parks and Outdoor Recreation (LPOR) grant to make improvements to its local fairgrounds. Exposure to the elements had rusted many of the fences and livestock pens and wire shortages had caused blackouts in the arena. GOCO funds helped the County replace arena materials, make improvements to the lighting system, replace livestock fencing, and address critical drainage issues. A new multi-use building was also constructed, which includes participant dressing rooms, showers, and bathrooms. The County focused on ADA-accessibility during the design and construction process and hopes the new amenities and improvements will provide a better visitor experience. Read a full press release about Baca County Fairgrounds’ improvements >>

In 2015, the City of Craig broke ground on the Breeze Park Phase I project, which included significant improvements to the park’s amenities and accessibility. With the help of GOCO funds, the City executed a second phase of the project. Breeze Park Phase II focused on upgrades to the 35-year old irrigation system; construction of an 820-foot, ADA concrete trail; and the addition of three 144-square-foot picnic shelters. Additionally, a 720-square-foot gazebo, two shade canopies, and a 3,400-square-foot safety surface were also installed. Updates to the park are expected to encourage the nearly 4,000 residents of Craig who live within a 10-minute walk of the park to engage in outdoor activities and participate in stewardship events organized by the parks and recreation department. Learn more about Breeze Park’s renovations >>

With its GOCO Planning grant, the Town of Parachute invested in a planning process to explore recreation opportunities and ecological improvements in and along the Colorado River. The plan provides a comprehensive examination of various improvements that can be made to the Colorado River to both enhance its environmental sustainability and create opportunities for outdoor recreation and public access. The planning effort has also helped identify, characterize, and provide initial engineering work for river enhancements, laying the groundwork for future river corridor investments. Explore the Town of Parachute’s recreation offerings >>

The North Fork Pool, Park, and Recreation District (NFPPRD), in partnership with Hotchkiss Home Plate, used GOCO funds to add four new ballfields at Crossroads Park. The former softball and soccer fields were located at the nearby fairgrounds, where fair events would take precedence and displace teams during meets. The new multi-use fields were constructed in one central location, alleviating safety and programming concerns expressed by the community. NFPPRD developed Crossroads Park, with its outdoor swimming pool, soccer fields, bicycle pump track, and more, to serve the recreational needs of the North Fork Valley, including the towns of Paonia, Hotchkiss, Crawford, and surrounding areas. Check out Crossroad Park’s new ballfields >>

Douglas County Conservation District, in partnership with the Colorado Agricultural Leadership Foundation, used GOCO funds to hire Mile High Youth Corps (MHYC) crews to make habitat improvements along a one mile stretch of East Plum Creek. Road construction and the overgrazing of cattle near the creek had accelerated erosion and diminished the quality of wildlife habitat on the property. MHYC crews worked to restore soil quality, remove invasive species, and revegetate the 42-acre area with native plant species. Corps members also stabilized stream banks and used rocks, logs, and native vegetation to prevent the stream from widening. These efforts will help protect the area’s wetland habitat and various native species of plants and wildlife. Learn more about MHYC’s stewardship and restoration work >>

Explore Elementary, in partnership with the City of Thornton, used its GOCO School Yard Initiative (SYI) grant to build a three-acre, nature-based playground at its new school campus. The school’s former playground offered limited opportunity for unstructured play. The new play space will provide Explore Elementary students and the surrounding community with active and passive play equipment, access to a learning garden, and the option to reserve the space for community events. Check out Explore Elementary’s Facebook page for more info >>

With the help of GOCO funding, the City of Colorado Springs hired Mile High Youth Corps to make improvements to a 17.5-acre area of Garden of the Gods Park. Efforts included the treatment and removal of noxious weed species and distributing seed mix to encourage the growth of native grasses. The Corps’ work will help restore the natural resources in and around the park, support the city’s long-term noxious weed prevention plan, and promote the importance of conservation efforts in the region’s most visited park.

Jefferson County used its GOCO grant to create a trails plan to enhance paved and soft surface trails and explore how trails can become better connected throughout the county. The plan also focused on improving safety, increasing trail-related recreation, and providing residents with more close-to-home trail access. Additionally, the Jeffco Trails Plan looked at opportunities and barriers to connecting neighborhoods, parks, schools, and facilities. The County hopes that the plan will provide residents and visitors with convenient access to the outdoors while promoting regional partnerships and collaboration. Watch a presentation on the Jeffco Trails Plan >>

The Conservation Fund, in partnership with Adams County and the City of Brighton, used GOCO Open Space funds to conserve the 79-acre Morimitsu Farm. The property is located just south of Brighton in the recently branded Historic Splendid Valley. The City of Brighton and Adams County identified the area as prime for growing, processing, and distributing local food crops. Conserving the property will allow for continued agricultural production on the land and protecting it from development forever. The farm’s soil is some of the most fertile in the state, and the property’s access to water from Fulton Ditch, a diversion of the South Platte River, makes it valuable for agriculture, agritourism, and agricultural education programming. Read a full press release on conserving the Morimitsu Farm >>

With its Local Parks and Outdoor Recreation (LPOR) grant, the City of Loveland built a 1.5-mile hiking trail at Prairie Ridge Natural Area—a 785-acre open space in northwest Loveland that features prairies, wetlands, and diverse wildlife habitat. Funds were also used to build a one-mile, ADA-accessible trail, a 26-car parking lot, restrooms, and educational signage. The natural area is the largest, city-managed open space in Loveland, and it has been inaccessible to the public since its purchase 17 years ago. The City hopes that the new amenities will provide residents and visitors of all abilities with the opportunity to safely recreate and connect with nature. Check out this video on Prairie Ridge Natural Area >>

The GOCO grant to Colorado Open Lands helped Colorado Cattlemen's Agricultural Land Trust (CCALT) conserve the 500-acre Rancho la Luz property. Rancho la Luz, which is located near the Colorado-New Mexico border, is primarily open ranchland and is an important part of the agricultural landscape in the southern San Luis Valley and Conejos County. The property is part of a growing block of conserved land in the vicinity and is in close proximity to the 650-acre Sego Springs State Wildlife Area. The stunning pastoral landscape forms the backdrop for visitors traveling along State Highway 142, the state-designated “Los Caminos Antiguos Scenic and Historic Byway.” Conservation of this property is part of the Conejos Ranchland Initiative, a partnership between Colorado Open Lands, Rio Grande Headwaters Land Trust, and CCALT. The goal of the initiative is to protect important agricultural land in Conejos County by conserving four of the oldest ranches and permanent settlements in Colorado. Read more about Rancho la Luz >>

The City of Evans used its GOCO grant to hire crews from Weld County Youth Conservation Corps (WCYCC) to restore areas of Riverside Park Open Space that were damaged during the 2013 floods. The entire park was closed for five years but reopened to the public in 2018 after significant restoration efforts. Corps members were hired to make improvements to an eight-acre area of the park that had not been restored and had become significantly overgrown. For eight weeks, crews worked to clear the area of brush, trash, and flood debris. These efforts will help reduce fire fuels, and make the area safe, accessible, and conducive for recreation. Read on about WCYCC’s stewardship and restoration work >>

With the help of GOCO funds, the City of Lakewood hired Mile High Youth Corps (MHYC) to conduct stewardship work along the Bear Creek Greenbelt, a vast open space park located in the southern portion of Lakewood. MHYC’s work included planting native trees and shrubs, removing invasive weeds, and seeding native grass. The corps’ work builds on a multi-year restoration effort by the City and its partners, which has resulted in nearly 100 percent removal of invasive Russian olive trees on 140 acres within the greenbelt. Crew members also helped restore creek bank areas, installed fencing, and planted wetland vegetation to support species diversity and improve water quality. Check out MHYC’s Facebook page for the latest on the corps’ work >>

The City of Colorado Springs, in partnership with Rogers Elementary, used its GOCO School Yard Initiative (SYI) grant to create the Will Roger Wilderness. Funds were used to replace the school’s outdated playground with a new play structure, climbing and balancing equipment, nature walk, and shade shelter. Additionally, to promote unstructured play, a grassy field was also constructed on school grounds. The Rogers Elementary community has been active in the school’s updating efforts. Recently more than 1,000 volunteer hours were committed to updating the school’s building interior and infrastructure. Watch the Will Rogers Wilderness ribbon cutting video >>

Yuma County used its GOCO grant to make updates to its local fairgrounds. Funds were used to update the livestock building, which had become outdated and in need of repairs. The project scope included acquiring a pre-engineered metal building to increase the current building’s size by 12,500 square feet. The new livestock building offers an open-air feature on its north side and includes an improved animal wash area with proper drainage. Additional enhancements include larger, ADA-accessible restrooms with showers, energy-efficient lighting, and reconfigured pens for showing events. The County hopes that these renovations will better equip the facility to host various events throughout the year, including the Yuma County Fair, and will allow for a better user experience for 4-H, Future Farmers of America, and community members alike. Read a press release about the Yuma County Fairgrounds project >>

GOCO funds were used to help Yuma County complete the second phase of updates to its local fairgrounds. Updates included purchasing and replacing the facility’s outdated animal pens with larger and safer units. Circular fans, drop curtains, and a cattle scale were also installed for an improved visitor and show experience. The County hopes that these renovations will better accommodate the volume of animals at the fairgrounds, provide a safer route for herding and showing, and offer improved ADA-access. The 104-year-old Yuma County Fairgrounds hosts more than 100 events a year and sees more than 2,000 visitors annually. Learn more about the Yuma County Fairgrounds >>